TWIN (Caribbean) yacht is a 62.00 ft long sailboat catamaran and spends the summer in and winter season in Caribbean Virgin Islands, Caribbean Leewards. It was built by Lagoon in 2015. The yacht layout features 4 cabins and accommodates 8 guests. The cabin arrangement is following: 4 queen cabins.

8 guests can be accommodated in 4 cabins as below :

Each cabin has a split mattress so that it can be made as 1 double bed or 2 singles side by side depending on guest's preference.

All cabins have ensuite bathroom and head.

The Master cabin is equipped with ample closets, drawers and even a sofa. Her spacious ensuite bathroom (with separate head) has an independent access to the cockpit.

In each cabin: A/C with private control, plugs and 2 adapters, 4 pillows, a quilt and extra blanket - Complimentary bottled water

Xmas/NYE winter 2018/2019: $ 39,600 based on Caribbean terms. BVI's & USVI's only
Caribbean terms: all inclusive with standard table wine and beers.
Excluding : clearance-cruising taxes (but BVI's cruising tax IS INCLUDED), marinas fees if any, special requests (champagne, specific alcohols orders, fine wines, ashore excursions...).
An additional fee for custom & clearance of 400 $ is asked for any charter with pick up and/or drop off in St Thomas, USVI
An additional 5% APA is requested for any charter outside the USVI's/BVI's - to cover clearance, cruising taxes, wifi and marinas & moorings fees.
For charters in Grenadines, please inquire. Delivery fees may apply for charters in the Grenadines.
For charter less than a week, please use the divide-by-6 rule.
Charters of 6 nights, use 6/7ths (six sevenths) of the weekly rate. Charters of less than 6 nights available depending on schedule and season, please inquire.
5 nights minimum rate 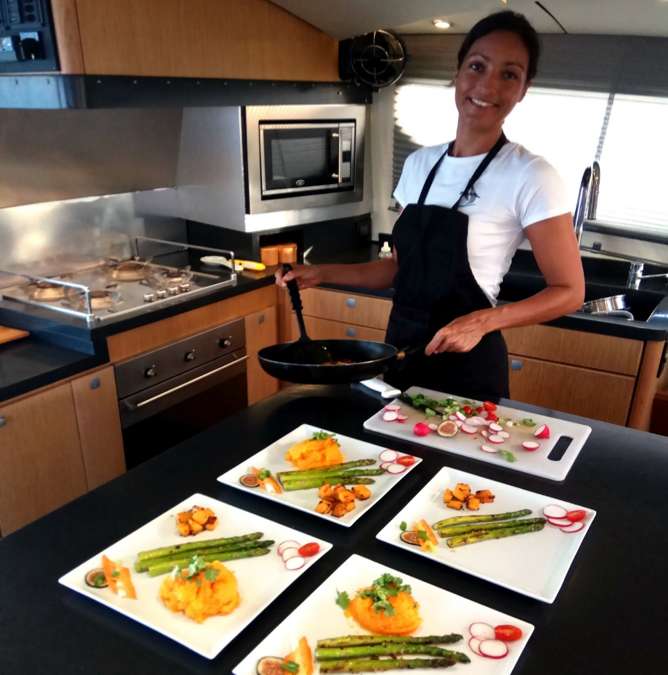 Chloe and Stefan have lived, cruised and worked together for over 10 years. They have sailed over 45,000 nm between them on their own yachts (including the Pacific, Indian Ocean, Red Sea and Mediterranean) and have hosted charters on 43-50ft monohulls and catamarans in the Caribbean and Latin America.

Stefan was born in Berlin, Germany, and developed a love of the wind and sea as a teenager, sailing his first dingy at the age of 16. He got his masters in Mechanical Engineering and has worked for Daimler-Benz, Procter & Gamble, GM and Connex; which lead him to a career in managing specialist multimillion dollar engineering projects in Australia - the only piece of land he considers home. His first love was always the ocean, however, so he decided to return to Europe the slow way; on his own yacht over the Pacific Ocean, getting as far as Bali before meeting Chloe, which changed his life's path forever.
Stefan continued sailing with Chloe over the Indian Ocean, Red Sea and the Mediterranean to the Canary Islands, where he decided it was time for a new project so started designing and building luxurious houseboats in Berlin. He loved the business but missed the ocean, so 13 houseboats later, Chloe and Stefan bought yet another sailing yacht to cruise the Caribbean.
In his free time, Stefan is a bit of a merman: Scuba Divemaster, free diver, kite surfer, surfer, windsurfer, spear fisher,...and guitarist.

Chloe was born in London, England and had a professional career in project management before developing an aversion to chairs and retrained to become a teacher, working for various charities and universities. Her passion in education and anthropology led her to Bali in 2007, where she met Stefan and initially came aboard his yacht as crew... after 10 years and 18,000nm together, she has finally been promoted to first mate.
Chloe's extensive travels have inspired her international cuisine, which favours fresh, healthy, rainbow-colored and seriously flavorful recipes. Italian, Spanish and Greek food is at the forefront of her culinary repertoire, as well as more exotic influences from South East Asia, India and Morocco.
Chloe's lifetime dedication to yoga practice has led her to getting certified in teaching Ashtanga yoga. In her free time she can be found practicing yoga, playing the guitar, island-hopping on the SUP or freediving.

Growing up in northeastern United States on the barrier islands off the coast of New Jersey, Jakes love and appreciation for the ocean had developed from a very early age.
Jake grew up surrounded by a family of divers, sailors, and fisherman; and in 2010 they traded their life in New Jersey for the warm waters off the pacific coast of Costa Rica. The next few years of his life were spent traveling throughout Central America and in 2015 Jake was introduced to the yachting industry. In 2016 after completing his high school diploma, he found his first job in the industry as Deck/Stew onboard TradeWinds flagship class where he chartered for a year traveling between St.Martin and St.Vincent delivering luxury sailing holidays.
Jakes longterm goals are to obtain his Dive Master and RYA Yacht Master to prepare him for a lifelong career in the yachting industry.

Brie/Swiss cheese with caramelized apples and walnuts on a bagel

Melon and prosciutto with mint

Find me a yacht!